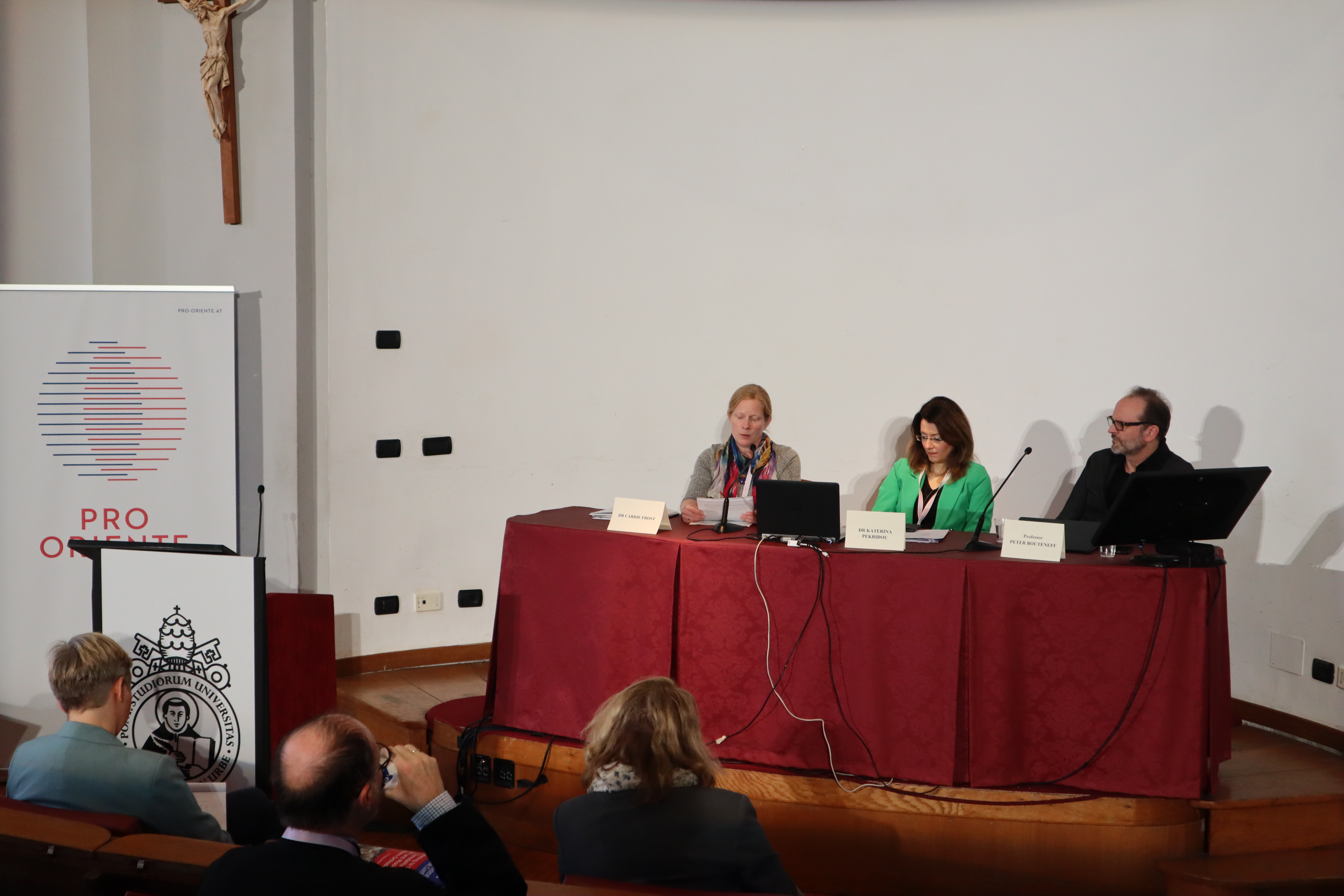 Rome/Vienna, Nov. 8, 2022 (poi) An international conference ended in Rome this weekend, that focused on Orthodox theologies, practices, and experiences of synodality, aiming at making these experiences accessible for the synodal process of the Catholic Church. The organizers of the conference "Synodality in the Life and Mission of the Orthodox Church" were the Vienna-based PRO ORIENTE Foundation and the Institute for Ecumenical Studies (IES) of the Pontifical University of St. Thomas Aquinas (Angelicum) in Rome, where the conference also took place.

On Monday, PRO ORIENTE President Alfons M. Kloss gave an extremely positive summary of the conference, both in terms of the "spirit" and the content of the meeting: "The Orthodox conference participants discussed their understandings and practices of synodality in a very impressive and open way." Thus, as intended, they made a valuable contribution to the global synod of the Catholic Church. The Catholic participants received these important impulses with care and attention, Kloss said.

At the same time, during these days of listening, discussing, and praying together, it also became clear, "how many current challenges in today's fragile world the Orthodox Church shares with our Catholic Church". This, Kloss said, was "a further impetus for Christians worldwide to engage in greater unity in the spirit of the Good News."

The Director of the Institute for Ecumenical Studies of the Angelicum, Fr. Hyacinthe Destivelle OP, underlined: "This conference, unique also in terms of its methodology, has been planned by its academic committee as a 'synodal experience' itself, involving Orthodox bishops, clergy and laity, monks and religious, men and women, youth, from different Churches and continents." He further stated that concerning the main goal of the symposium, to offer an ecumenical contribution to the current synodal process of the Catholic Church, the organizers' expectations were not deceived. "Not only the contributions were of high academic quality, but also the discussions were insightful and opened very important perspectives", the IES Director said.

Ecumenism and synodality require one another

It had already been stated in the opening session of the conference that the exchange of ideas and experiences can inspire not only the Catholic Church, but also Orthodoxy. After all, we are "on the way together," as Cardinal Mario Grech, Secretary General of the Vatican Synod, put it in his greeting.

Grech was deeply moved by the willingness of so many Orthodox bishops, priests, and theologians to share their experiences of synodality with their Catholic brothers and sisters. He said he was very grateful for this "gift" of Orthodoxy and stressed how important it was for the Catholic Church in its synodal process to learn more about the synodal theology and practice of the Orthodox Churches, because, Grech said, "being ecumenical requires to be synodal, and to be synodal postulates to be ecumenical".

The importance of the conference for the Synodal Process of the Catholic Church was also emphasized, among others, by the active participation of Sr. Nathalie Becquart, Undersecretary of the Synod, Prof. Myriam Wijlens, member of the Synod Steering Committee, and Prof. Peter Szabo, member of the Synod Theological Commission.

In his greeting, Angelicum Rector Fr. Thomas Joseph White highlighted his institution's long ecumenical tradition. PRO ORIENTE President Alfons M. Kloss delivered a greeting from Cardinal Christoph Schönborn, Chairman of the Board of Trustees of PRO ORIENTE. In it, the Cardinal emphasized the importance of the conference, which falls precisely within the mission of PRO ORIENTE. Cardinal Schönborn was unable to attend the conference in Rome because he was in Bahrain participating in the papal visit and the "Bahrain Dialogue Forum".

President Kloss, for his part, added that it was a necessity for PRO ORIENTE to be involved in the synodal process. This, he said, applied not only to this and further two conferences at the end of November with the Churches of the Syrian and other Oriental traditions, but also, for example, to numerous youth workshops that PRO ORIENTE has organized in the Middle East in recent months. Some of the young participants in these workshops were also present in Rome. "We want to make the richness of Christianity visible on the common path to unity", Kloss said.

Cardinal Kurt Koch, president of the Vatican's Dicastery for Promoting Christian Unity, emphasized in his greeting, among other things, the importance of the conference for the official Catholic-Orthodox dialogue, in which the international commission has been working for years on the relationship between primacy and synodality. He hoped that the conference would provide valuable impulses for this dialogue, as well as for the 1.700th anniversary of the Council of Nicaea, the first synodal assembly at the level of the universal Church, in 2025.

Metropolitan Job of Pisidia, Orthodox co-chair of the International Commission for Catholic-Orthodox Dialogue, acknowledged in his remarks that while synodality in Orthodoxy does function at the level of autocephalous churches, the same cannot be said for either the local level below or the universal level above. On the local diocesan level, it often depends far too much on the respective bishop and his closest collaborators; on the universal level, one cannot speak of a worldwide synodal Church, the Metropolitan said. This was proven not only by recent intra-Orthodox tensions, but also already by the genesis and implementation of the "Holy and Great Council" in Crete in 2016, in which not all autocephalous Churches participated.

In a similar vein to Metropolitan Job, Serbian Orthodox Bishop Maxim (Vasiljevic) also expressed his views. He delivered the opening lecture on Wednesday evening on the theme "The Orthodox Church is a Synodal Church". Bishop Maxim acknowledged numerous current challenges that have led to many local Churches existing as independent or even isolated – depending on how one looks at it. The bishop advocated a partial revision of traditional forms of synodality. New schemes must be found to better express the global and existential character of the Church, he said. Bishop Maxim pleaded for more pan-Orthodox and ecumenical cooperation. Such a revitalized synodality could serve to preserve the Church's mystery of salvation, the bishop said.

Laity and women in Orthodoxy

The American Orthodox theologian Teva Regule gave the introductory keynote lecture on the second day of the conference, which was devoted to the aspect of participation of all believers in the synodal life of the Church. Among other things, she shed light on the participation of lay people in synodal processes in Orthodoxy. Historically, lay people have always participated in the decision-making process of the Church, she said. Although the early ecumenical councils were primarily episcopal assemblies, it was lay people - though in these specific cases the Byzantine emperors - who had convened the councils. And finally, it was also the faithful people - the laity - who had to accept the decisions of the councils, Regule said. Thus, after the Council of Nicea in 325, the condemnation of Arianism had only been able to prevail through the acceptance of the people.

A counter-example: the Orthodox faithful rejected the decisions of the Council of Ferrara-Florence (1438/39), so they never came into effect. Today, especially in the Orthodox diaspora, clergy and laity, men and women, are active in the Church in a variety of ways, Regule said. Lay people are represented not only in advisory but also in decisive bodies at the local parish and sometimes diocesan level. In some dioceses, lay people also have a say in the election of bishops, for example in the Orthodox Church in America (OCA). This is not a universal principle, Regule acknowledged.

In many places, however, independent groups have already formed in the Orthodox Church to deal with questions of lay participation. Regule referred to the Orthodox Christian Laity organization in the United States.

The theologian also explained the current state of women's diaconate in Orthodoxy. Women, she said, have always participated in the diaconal ministry of the Church, including as ordained deacons in the early Church. For about 150 years, she said, there have been voices calling for the reintroduction of the diaconate of women.

In 1988, on the initiative of the then Ecumenical Patriarch Demetrios, a conference was held in Rhodes devoted to this subject. The result of the deliberations was that, while not in favour of women's priesthood, it was stated that the office of deaconesses should be revived. This, she said, was a positive response to the many needs and demands of today's world. Since then, several conferences have addressed this issue.

In 2000, for example, numerous theologians - especially from the diaspora - addressed a letter to Patriarch Bartholomew to this effect, pointing out that there was nothing that would speak ecclesiastically against women deacons. Ground-breaking steps have since been taken at synods of the Orthodox Church in Greece as well as the Patriarchate of Alexandria, Regule said. Unfortunately, the decisions of these synods were only partially received by the faithful as well. The theologian, however, expressed her conviction that the efforts within Orthodoxy continue. Regule is president of the Orthodox Theological Society in America (OTSA) and serves on the board of the St. Phoebe Center for the Deaconess.

Orthodox Kenyan clergyman and theologian John Njoroge, in his keynote lecture on synodality and mission on Saturday, came to speak, among other things, about the 2016 Council of Crete. Despite all the difficulties in preparation and implementation, he said he wanted to call it an "indicator of the possibilities of having future councils". Internal Church conflict topics such as the situation of Orthodoxy in Ukraine or in Africa, or the general structure of Orthodoxy in the diaspora need just as much synodality as do global challenges facing society as a whole. This applies to the topics of justice and peace as well as to the climate crisis. Lack of synodality or conciliarity among Orthodox Churches would affect the future life and mission of the Church in the world, Njoroge warned.

The world, which according to Njoroge is increasingly losing the right perspective, needs the witness of a united church. In this context, he also pleaded urgently for a stronger connection between the synods of the local or national churches and the patriarchal synods. The relevance of synodality for a missionary Orthodox Church, he said, is to "create a space where believers, parishes, dioceses as well as mission-oriented organizations get inspired or motivated to engage in active mission and evangelistic activities in their home countries and abroad".

Other presentations and discussions on Friday and Saturday dealt, for example, with the ground-breaking Council of the Russian Orthodox Church in 1917/18, Orthodox lay movements, the participation of lay people in the election of bishops and primates, Orthodox youth movements, Orthodox involvement in the World Council of Churches, and the topic of "Women and Synodality".

About 80 bishops, clergy, theologians, and other interested persons had come to Rome. The conference was under the joint auspices of the Vatican Dicastery for Promoting Christian Unity and the General Secretariat of the Synod. The results of the conference will also be published in a book of proceedings.

The conference presentations are available on the YouTube channels of PRO ORIENTE and the Angelicum: